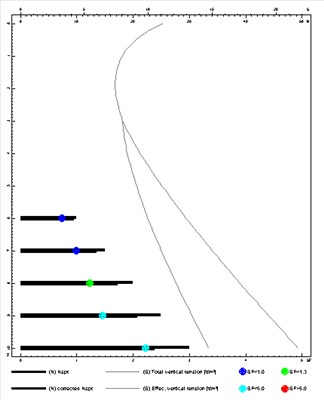 The LIQUITER program determines the safety factors pertaining to the liquefaction of incoherent saturated terrains subjected to earthquake phenomena.

The used calculation method, proposed by Seed and Idriss in 1982, is the best known and most frequently used as it requires the knowledge of only a few and commonly used geotechnical parameters(volume weight, relative density and the mean particle diameter).

Like all methods based on the concept of resistance factors, it is necessary to evaluate the resistance of the soil to the cyclic shear stresses: the program uses the correlation between the resistance to liquefaction and the number of blows of the SPT test.

The last input value required by the program is the definition of the seismic parameters that are necessary to simulate the earthquake.

The used formula enables one to take into account the sporadic character of the maximum acceleration peaks through the ratio of cyclical stress induced by the earthquake with reference to a mean value instead of the maximum value.

For each SPT test that is carried outs, the corrected number of blows is calculated in such a way as to consider the lithostatic pressure, through the use of a corrective coefficient that is a function of the depth where the test is performed and the relative density.

It is also possible to consider the presence of a load and take the layers of soil above the aquifer, considered as loads acting on the underlying terrain, into account.

The verification is based on the determination of the resistance to liquefaction factor witch is calculated as the ratio between the limit shear stress that induces liquefaction and the maximum shear stress induced by the earth quake, but leaving out the interstitial pressures and deformations that develop during the earthquake.