Equipment
Monitoring - Displacement - Movement
Tagged:
Type:
Magnet Extensometer
Added on 10/10/2014, visited 1163 times
No reviews have been submitted for this Equipment so far. 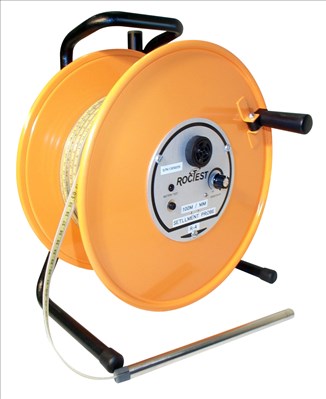 The R-4 magnetic probe extensometer consists of an array of magnetic targets, surrounding a common access pipe, positioned at different depths along the length of a borehole or the height of an embankment or fill.

A reed switch probe, lowered down the access pipe, detects the position of the magnet anchors outside the tube. The probe is suspended by a single graduated tape that incorporates the electrical leads. The tape graduation is used to determine the deformation between magnetic anchor points along the pipe’s axis.

The plate anchor consists of a plate with a central hole. The plate anchors are installed with the access pipe as the construction of the embankment or fill proceeds. Telescoping access pipes are used where deformations exceeding 1% are expected. The R-4system is compatible with standard inclinometer casings. The use of a probe centralizer is recommended for repeatable readings.