The Eurasia Tunnel, connecting the Asian and European continents underneath the Marmara seabed, was inaugurated on the 20th December with President Recep Tayyip Erdoğan, Prime Minister Binali Yıldırım and many other foreign guests in attendance.

The tunnel, expected to provide a practical solution to Istanbul's traffic problem, will cut down the travel time between the two sides of Istanbul to just 15 minutes.

The bidding for the two-story tunnel project for rubber-wheeled vehicles, followed the footsteps of the undersea rail tunnel Marmaray and was held by the General Directorate of Infrastructure Investments of the Transport, Maritime Affairs and Communications Ministry on June 12 , 2007.

The Eurasia Tunnel, which will significantly reduce the travel time between Istanbul's Kazlıçeşme on the European side and Göztepe on the Asian side, was planned in connection with the three existing bridges crossing the Bosporus strait.

The construction on the tunnel began in 2011 and has cost an estimated $1.25 billion. Built 106 meters under the Bosporus, the tunnel is expected to be used by 100,000 vehicles per day.

The Eurasia tunnel will also provide uninterrupted 4.5G mobile data service at 106 meters below the sea level. The coverage will be provided with 16 radio station transmitters. 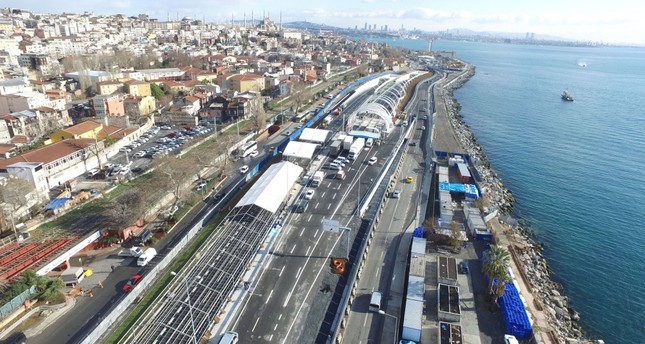